Instigated by CK-CARE (Christine Kühne – Centre for Allergy Research and Education), the Global Allergy Forum has now been held in Davos for the third time. From 28 June until 1 July, some 70 world-renowned scientists in the field of allergology and its allied disciplines convened to discuss challenges and possible solutions in the field of atopic dermatitis/eczema.

Atopic dermatitis is the most widespread chronic inflammatory skin disease. Among allergic disorders, atopic dermatitis is considered to be a model disease. However, in children that are affected, a significant proportion (approx. 40%) experience healing before the onset of adolescence. It is believed that this natural healing is at least partly attributable to as yet undiscovered mechanisms that lead to an immune tolerance of environmental factors like allergens. To date, such mechanisms have not yet been investigated systematically. Research in this area will exert a direct impact on the quality of life of patients.

Divided into six working groups, the participants at the GAF 2015 analysed current problem areas such as environmental factors, particularly their impact on the bacterial flora (microbiota) of the skin, the development and course of atopic diseases, plus prevention strategies.

In the “Psycho-Neuro-Immunological Aspects/Itching” working group, the importance and problems of itching as a primary symptom of atopic dermatitis was a clear-cut subject for elaboration. Compared with pain research, there are major shortcomings in the research undertaken into itching. Itching as a dimension of suffering is not taken seriously by many non-sufferers, nor by society. Progress however can be expected by imaging methods that can visualise the processing of itching by the brain; the same methods have also revealed surprising results about the involvement of hitherto unsuspected regions of the brain in this sensation.
In their investigation of environmental factors, the “Environment/Microbiota” working group looked into outdoor air pollutants but also focused on cutaneous microbiota. Here, a great deal of research work is still undertaken into individual differences, into the actual role of skin surface microbes (“beneficial or harmful”) as well as into the potential therapeutic implications of external applications of probiotic bacteria to support anti-inflammatory therapies. Even the relationship between dietary intake, the gastro-intestinal tract and skin microbiota constitutes a new research area.

The “Skin Barrier” working group built on the rapid progress made in recent years; in particular the discovery that, as a result of specific mutations, dryness of the skin and barrier dysfunctionalities can be attributable to genetic factors; (i.e. a mutation in the gene for the epidermal protein filaggrin will lead to a high predisposition to the development of atopic eczema). The group called for further research into an improved and standardised measurement of barrier functions in daily clinical routines as well as intervention studies into correcting malfunctioning barriers (keyword: skin care).

The “Epidemiology and Standardisation” working group turned its attention to epidemiological research methods, where improvements to measuring instruments would lead to a better diagnosis of the disease but also to measurements of the severity of the eczema. The starting point for such investigations should be a database for neurodermatitis at a population level. Such a database does not yet exist. The clear definition of subgroups in the disease as well as an understanding of the roles of prenatal influences and the effects of various intervention programmes appears to be equally important. A need for healthcare research in the field of neurodermatitis appears to be pressing. There is also a lack of basic epidemiological knowledge in the medical profession.

In the “Immune Deviation” working group the importance of immunological but also pharmacological research to correct and remedy aberrant immune responses was underscored. The scope of this critical research also extends to the examination of comorbidities, i.e. the simultaneous emergence of other diseases. New therapeutic approaches also include biologics, i.e. an antibody against the interleukin 4 receptor, as well as inhibitors of kinases and phosphodiesterases. The induction of immunological tolerances to common allergens remains a long-term objective. Encouraging results in allergen-specific immunotherapy (desensitisation) and in neurodermatitis have already been achieved.

A further group addressed the enormous chasm between the scientific progress that has been made in dermatology and allergology and the translation of this knowledge in the everyday work of doctors and the lives of patients. There is a lack of information for key target groups such as physicians, healthcare professionals, patient organisations and, not least, political decision-makers. That’s why it is imperative to improve educational activities at all levels and for a multitude of target groups. The aim of the discussions in this working group was to arrive at concepts and actions that would close this information gap.

The results and findings of the 3rd Global Allergy Forum are summarised in the third “Davos Declaration”. It reflects the current state of research, education, healthcare and knowledge transfer, as well as put forward concrete proposals for improving the situation in allergology. 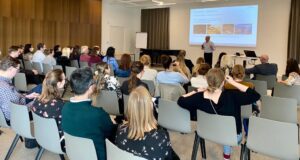